Commercial real estate transaction activity is expected to fall due to economic uncertainty and rising interest rates that have led to a sharp rise in mortgage rates, panelists said. CRE Finance Council‘s annual conference this week.

The conference took place as turmoil rocked the financial markets. The Federal Reserve raised its key rates by 75 basis points, the biggest one-day jump in 28 years, in a bid to curb soaring inflation. The consumer price index hit 8.6% year-on-year in May, driven by soaring housing and energy costs.

After peaking at 36,585 in early January, the Dow Jones Industrial Index fell more than 20% and was below 30,000 this week. And more importantly for commercial real estate, the 10-year Treasury yield rose nearly 200 basis points and rose above 3.40% this week, its highest level since January 2011.

While commercial real estate fundamentals remain healthy across most sectors, worrisome economic news increases the likelihood of a recession in the coming quarters and risks putting the industry on hold. “It’s been a while since we last discussed stagflation,” said CREFC chief executive Lisa Pendergast. “There is no doubt that rising rates will have a negative impact on mortgage rates and cap rates, and the recession may have a deleterious effect on real estate cash flow.”

The commercial real estate market started the year on a high note, with transaction volume and property values ​​hitting all-time highs in 2021, a trend that continued into the first quarter of 2022. But the persistent nature inflation prompted a reassessment of Fed policy. Not only are rates rising, but risk spreads are also widening. 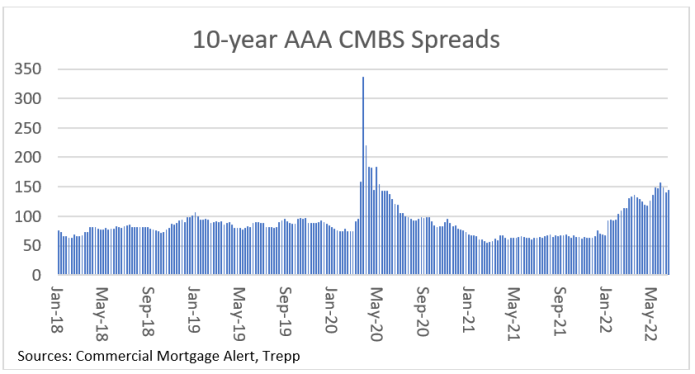 For example, the spread of 10-year-old triple-A seniors CMBS has risen more than 80 basis points over the past year, with this class priced 145 basis points over Treasuries in a deal released this week. The combination of rising rates and higher risk spreads has increased the cost of mortgage debt by 200 to 250 basis points since the start of the year. This creates ripple effects across the industry, including:

Temporary blip or start of slowdown?

The new capital market environment has even impacted government-sponsored companies Fannie Mae and Freddie Mac, which have raised rates and “are not as competitive as other sources of capital,” according to multifamily loan managers. For the first time in many years, GSEs may not meet their full annual allocations, which have been set by the Federal Housing Finance Agency at $78 billion in 2022.

Not all sources of mortgage debt will be set aside. Portfolio lenders do not have the same mark-to-market constraints and hedging risks as securitized lenders, so they will continue to source transactions that meet their quality and yield requirements . However, the debt sources that are still behind the loans are implementing a new emphasis on debt service coverage and exit cap rate assumptions. Strong debt service coverage means loans must have enough cash to make payments even if income deteriorates. Conservative exit rate assumptions limit overly optimistic growth assumptions that have led to aggressive lending in past cycles.

Many attendees of the CREFC event – ​​which reached a record attendance of 1,424 – expect market activity to slow significantly at least through the end of the summer. Whether the decline continues will depend on the economy’s performance in the second half of the year and the Fed’s success in curbing inflation without creating a deep recession.

Logistics Park I-4. Image courtesy of Colliers USAA Real Estate and Seefried Industrial Properties this week opened the first building at the I-4 Logistics Park in Deltona, Florida, a 1.8 million square foot complex that will be one of the largest speculative industrial developments in Central Florida. The development will be constructed in two phases […]